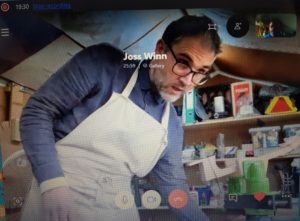 I talk to my good friend Joss Winn about spirituality, Buddhism and Quakerism, the making and playing and crafting of guitars, research into Luthiers, and the impact of the pandemic on work and home. Joss and I have been friends for a decade, writing on critical theory and higher education, and attempting to walk-the-walk on alternative practices. In this podcast, we discuss the common strands or threads that accompany personal transformation, the importance of making, the possibility for autonomy in work, and how one might know oneself and recover oneself after a breakdown.

It seems apposite to interview Joss at this time, as he and his wife Sue came to my Mum’s funeral almost seven years ago. In fact, the anniversary of her death is in two days. I will be forever grateful that they were there.

You can read more about Joss’s work at: https://josswinn.org/

His lovely, edited collection of his late father’s work is at: https://josswinn.org/2016/06/22/what-we-leave-behind/

With Mark Charlton from down our street, I discuss our citizen science project-cum-group therapy session-cum-local diary of life, that is our Street Diary under the dominion of Covid-19. We discuss how we are living under the virus as it infects our bodies and our lives, the role of the market and the idea of the common good, and whether everything really will come up roses. I mention watching the 1973 FA Cup Final, and we both highlight how busy and exhausted we are.

Street diary, known as The Coronavirus Diaries, can be found at: https://streetdiary.org/

I am currently listening to new work by Four Tet, Caribou, Little Dragon and Yves Tumor. I commend them to you.

This is a podcast at the intersection of: first, what it means to be a professor; and second, what it means to be on strike. I am one of two professors on our UCU committee, and I do casework for members. Being on strike involves supporting more precarious colleagues, staff who are struggling over inequalities or casualised employment, staff whose pay has been devalued over a decade, staff who are struggling with excessive and intensive workloads. It involves trying to tie these struggles in to student campaigns, the work of our professional services’ staff in creating a meaningful learning environment, our work on decolonisation and gender equality. Beyond this, it involves linking to struggles in society for the common good.

However, it feels important for professors to show leadership in our #fourfights and #ucustrikesback campaigns. It feels important for them to challenge their own privilege, status, resources, and to place these at the service of those with less. So, I invited some questions and comments about professors on strike and professors not on strike, and I seek to address them here. There is also something of a preamble from me, which as usual goes on and on and on.

As ever, the music is provided by Rae Elbow and the Magic Beans, with the closing track being indoctrined sedation.

Anyway, in solidarity, and keep warm and safe on the picket line.

I’m ready to write. I’ve sorted my notes. I feel the urge, need, desire to write again. And to write something substantial, with the University as the unit of analysis and with a dialectical, humanist, relational framing.

I’ve detailed what this next project is about, namely a monograph entitled The Hopeless University: Intellectual Work at the End of the End of History.

Images of the structure are available at: Chapter 1; Chapter 2; Chapter 3; Chapter 4; Chapter 5; Chapter 6; and Chapter 7. As a kick-start, I discuss the key themes here.

I decided to dedicate a blogpost to my mate Jon Beech. If you want to make a donation or get involved with the Leeds Asylum Seekers Support Network, you can do so here. The blogpost is not recorded in a café when I’ve forgotten my directional mics, and so the sound quality is better.

I discuss or make mention of 11 things that have catalysed important reflections for me in 2019. These are as follows.

I met my friend and fellow Walsall supporter, Paul Trivett, in The Bell, Walsall, ahead of the home game with Macclesfield on Saturday 14 December. We discussed the differences between faith and hope, the relationship between hope and football as opposed to hope and University life, the ways in which institutions peddle hope, and the almost-impossibility of building coherent lines of resistance and struggle from where we are. Because, frankly, building such lines just isn’t what people want, or work they wish to undertake. Instead, we fixate upon the limited horizons of what we can imagine will help us to survive in the world.

And I just thought we were going to discuss away games we had loved, our favourite football podcasts, and the inability of football managers to find systems of play that matched the players they had at hand.

As usual, the music is provided by Rae Elbow and the Magic Beans.

I met my friend Sarah Amsler from the School of Education at the University of Nottingham last Friday for a catch-up. We discussed issues of how hope is coded, which made me think about how it is eroded, Vanessa Andreotti’s metaphors of the hospice and the beach in relation to institutions and structures, Alexis Shotwell’s ideas of purity and entanglement in our everyday experiences, and the gloopy nature of brownies.

Our discussion took place in the Ugly Bread Bakery in Nottingham, and so there is a lot of background noise. This has made me tetchy, because I forgot my directional microphones. So, I apologise that you will have to turn up the sound and work hard to catch what Sarah has to say. I have uploaded the file anyway because if you ignore my constant interruptions and jibber-jabber (note to self: #stfu), you will hear how insightful she is.

The extra resources Sarah mentions are as follows.

Vanessa Andreotti: How can we hospice a dying way of knowing/being and assist with the birth of something new, still fragile, undefined and potentially (but not necessarily) wiser with radical tenderness? See also: Toward Alternative Futures in Uncertain Times.

Amsler, S. (2016). Learning hope: an epistemology of possibility for advanced capitalist society. In: Social sciences for an other politics: women theorizing without parachutes. Palgrave Macmillan.

Santos, B. (2014). Epistemologies of the South: Justice against Epistemicide. London: Routledge.

As threatened last week, I appear to have more energy for this again. So, I sat down with my compadre Rob Weale from DMU for some jibber-jabber about the process of making as a protest of creativity. Rob works as a learning technologist, and is a Leicester City fan, father, animal husband/chicken organiser, and a maker of sound art, soundscapes, organised sounds, digital compositions. He writes and makes as Rae Elbow and the Magic Beans, as has two albums out (the human species and ambivalence is no escape), with a third slated for next year. I am very pleased that Rob has gifted me (for the price of curry and a few beers) some sounds for this podcast.

In our conversation, we discussed: our experiences of Durham and Lincoln Christmas markets; the comparative pain of writing (text, digital artefact, sound, whatever); whether making was enough in a world of pain and what making means in the context of saying no!; the boundary between nihilism and activism; the anxiety surrounding the release of new digital and instrumental music if the track titles are not quite right; and, what to do when cynicism is ascribed to one’s work. Rob had a few things to say about hopelessness and the end of the end of history. Sadly, we did not get on to talking about our favourite Christmas films or records – maybe next year.

It’s been a while – my energy has been elsewhere, caring for my Nan (102!), reading Hegel, thinking about dialectical materialism and historical materialism, and philosophy and science, and trying to get my head around the next book project (The hopeless university: intellectual work at the end of the end of history). Anyway, my energy for this appears to be back, so let’s give it a whirl.

In this jibber-jabber, I set-up a few forthcoming episodes that I am hoping to record with some compadres, to discuss their lives inside the University and their practice, and to hear their take on hopelessness. I hope to start next Monday by talking to Rob Weale, who made the music I use on the podcast. Check out his work on SoundCloud, as Rae Elbow and the Magic Beans.

I also revisit some work I did with Kate Bowles, who works and exists over in Australia, on the idea of the University as an anxiety machine. In part, this has been kick-started because I spoke at an event on student mental health earlier this week, and the pivot was that paper. Connected to this, I call out professors whose own working practices reinforce the self-harming activities of the academic peloton. This includes those who overwork and those who cross picket lines, as examples of behaviours that damage academic and intellectual citizenship.

One of the things that has kept me from podcasting has been listening to other podcasts, and in particular my thinking and reading and writing and speaking have been influenced by:

I commend these to you.

*Parental Advisory* between 17 and 18 minutes there is some swearing, as we discuss interactions following an English Defence League demonstration in Leicester in 2010.

It’s been a while, and I have been spending so much time marking essays that I felt the need to do something different. So, the two things I’m doing are: first, walking the streets of Leicester as part of Beat the Streets; and second, talking with John Coster about documentary media, storytelling, and the role of the academic. I’ve known John for a decade, and seen him develop expertise around citizen journalism, social media and documentary practice.

So in this episode, we discuss the relationship between citizen journalism/media and both local communities and national media outlets. In particular, we discuss how this gets affected or changed in moments of extreme stress, in this case the EDL demonstration in Leicester in October 2010. We go on to discuss the purpose of John’s documentary media centre, and how it engages with issues that cross apparently binary divides, or at least divides that appear to be becoming more polarised.

This site is hosted by May First/People Link, an organization that redefines the concept of "Internet Hosting Service" in a collective, progressive and collaborative way. See: https://mayfirst.org/aboutus